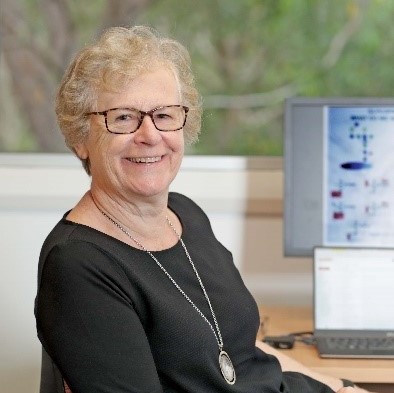 Prof Nicki Packer has had an extensive and varied research career in both Chemistry and Biological Sciences. She helped establish the Australian Proteome Analysis Facility (APAF) and co-founded Proteome Systems Ltd, a biotechnology company in which her group developed glycoanalytical technology and informatics tools. She has gained national and international recognition for her research in glycomics, using proteomics and bioinformatics approaches and linking it to biological functional research. Her current research is in the structure, function, informatics and application of glycans and their conjugates as molecular markers, focusing on their role in cancer, therapeutics and microbial infection. Nicki currently holds positions as Distinguished Professor of Glycoproteomics, and is a Chief Investigator in two ARC Centres of Excellence (NanoScale BioPhotonics and Synthetic Biology), is Academic Lead of APAF at Macquarie University, Sydney, and is a Principal Research Leader at the Institute for Glycomics, Griffith University, Australia. Her research role in all her work is directed towards the role of protein glycosylation in health and disease; specifically her current projects encompass the analysis and role of glycosylation in many systems including the i) function of glycans attached to glycoproteins and glycolipids, ii) cell membrane glycosylation interactions, iii) glycans as targets for bioimaging, diagnosis and drugs, iv) the mucin glycome-microbiome interactions. She has also raised three (reasonably well-balanced) children…..